Translated as “home island”, Heimaey is the largest and only inhabited island in the Vestmannaeyjar archipelago off the South Coast of Iceland.

The 5000-person town was completely evacuated in 1973-74 when the volcano Eldfell erupted. The resilient island people were quick to respond and their commendable efforts saved the harbour from being taken over by the lava. Their deep-rooted patriotism is admirable and 80% of the population returned in the two years following the eruption.

The landscape has a dramatic air to it – the stark difference between the older and more recent lava, new houses built on the edge of the lava that buried the old houses, and the colourful hues of red volcanic sand, black ash and green moss.
A sightseeing tour is a great way to see the stunning landscape, visit the puffin colony at the southern tip of the island and learn about the dark history of the island.

Boat tours are also popular. The cliffs around the island are brimming with a variety of birds and the waters are home to dolphins and several different whale species.

With two active volcanoes, a variety of other trails and difficulty levels, hiking is a great activity with panoramic views of the volcanic island, ocean and surrounding archipelago. 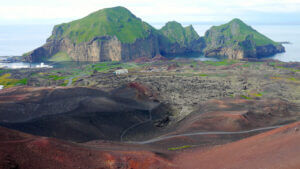 A fascinating tour around the Heimaey island – visit the largest puffin colony in Iceland, learn about the devastating eruption of Eldfell and witness the local sport Sprang!