Stykkisholmur is the largest town in Snaefellsnes, a 90 km long peninsula in West Iceland known for its diverse natural sights, rich history and charming fishing towns.

The route to the port takes you through the scenic Breidafjordur Bay dotted with uncountable islands and an important habitat for many species of birds, including the white-tailed eagle, and marine life.
You will also pass one of Iceland’s most photographed mountains, Kirkjufell.

The town of approximately 1200 people was formed in the mid-16th century and named after a small island in the harbour, Stykkid.

As you approach the charming harbour area, the scene looks like it is right out of a painting with bobbing fishing boats, colourful wooden houses and an unusual church. What a wonderful introduction to Snaefellsnes!

The Snaefellsnes peninsula is often referred to as “Iceland in miniature” because of the incredible variety of sights offered by this small region. The majestic Snaefellsjokull glacier, desolate lava fields and fascinating rock formations, inspiring coastal views, orca whales and bird colonies – there is something magical about Snaefellsnes.
Snaefellsjokull dominates the western tip of the peninsula and was also featured in Jules Verne’s famous The Journey to the Center of the Earth.

The most popular shore excursion is a sightseeing circle tour with options for a lava cave tour and hiking. 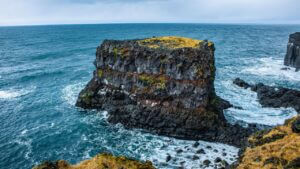