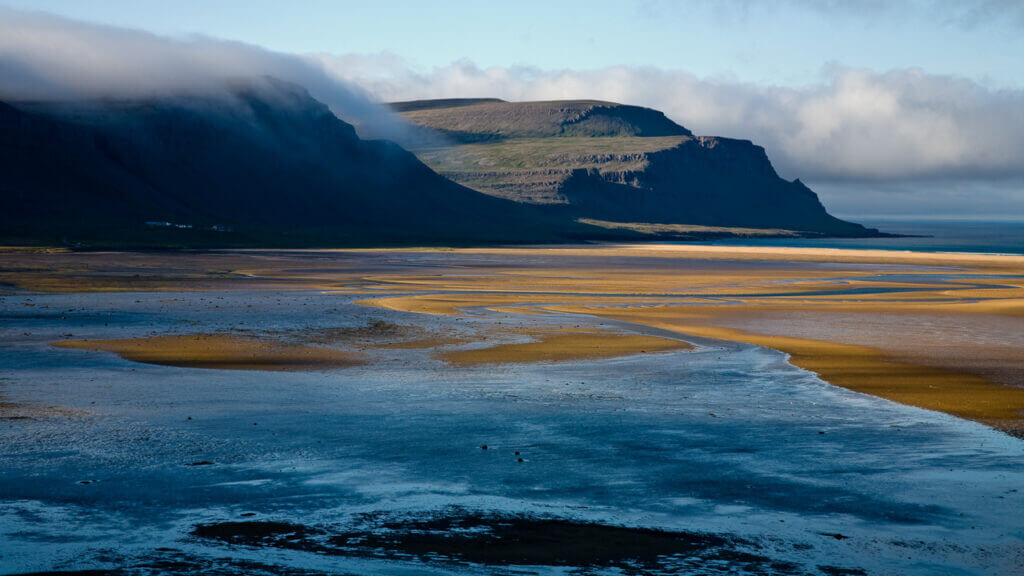 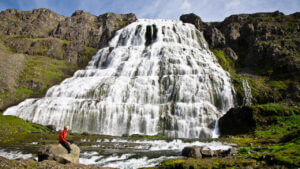 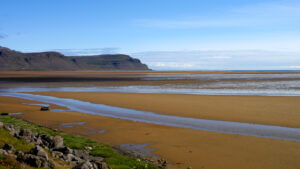 • The breathtaking orange-hued Raudasandur beach
• The spectacular Dynjandi waterfall, a majestic icon of the Westfjords
• Fjord landscape of Onundarfjordur, Dyrafjordur and Arnarfjordur

We start the tour by driving to the breathtaking Raudasandur beach. It is a long drive but we travel through some of the most beautiful fjords and charming fishing towns in Iceland.

Geologically considered to be the oldest part of Iceland, Onundarfjordur has a unique golden beach and dune system that are a protected eider duck nesting site.
Dyrafjordur is rich in flora, fauna, history and geological marvels and home to the highest mountains of the Westfjords.
We take the new tunnel at the bottom of Dyrafjordur. Before the opening of the tunnel in autumn 2020, the only connection between the Northern and Southern Westfjords was a treacherous mountain pass only accessible in the summer.
The tunnel exits in Arnarfjordur, which at 30kms long is one of the longest fjords in Iceland. It is well known in folklore for being home to various sea monsters.

Raudasandur is one of the most unique beaches in Iceland and gets its colour from pulverised scallop shells.
The 10 kms of orange-pink sands are most spectacular at low tide contrasting sharply with the dark mountain cliffs and blue ocean.
On a clear day it is possible to view the Snaefellsjokull glacier towering on the horizon.

We drive back to Arnarfjordur where we visit the majestic Dynjandi waterfall, one of Iceland’s prettiest waterfalls and an icon of the Westfjords.
Dynjandi is at the bottom of the Dynjandisvogur creek after which the waterfall is named.

A series of 7 waterfalls falling like a bridal veil from the edge of a cliff, Dynjandi will take your breath away.
The river originates from the Eyjavatn lake in the Glama moors, which were home to the now extinct Glamajokull glacier.
We stop for an hour so you can enjoy the waterfall and scenic landscape. It is possible to take the short hike for a closer look at the top tier and spectacular views of the fjord and surrounding mountains. 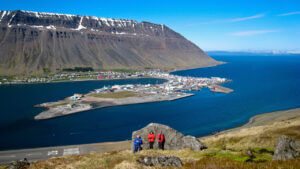