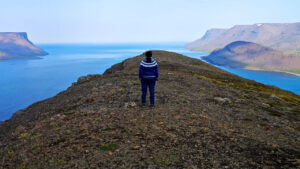 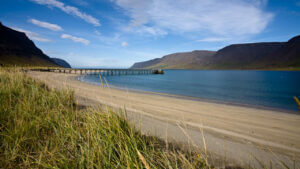 Dyrafjordur is rich in flora, fauna, history and geological marvels and home to the town of Thingeyri, one of the oldest settlements in the Westfjords. It is here where the regional Viking assembly (or “thing”) was held and the first trading post of the Westfjords was established.
The Haukadalur farmstead beyond the town is the setting for many events in The Saga of Gisli, a classic outlaw Saga from the 9th and 10th century.

The mountain range between Dyrafjordur and Arnarfjordur is referred to as the Westfjords Alps and we will stop briefly to enjoy the impressive mountain and fjord views.

For smaller groups in a 4X4, we can take the rugged trail to the top of Sandafell mountain overlooking Thingeyri. The views of the fjord and ocean are spectacular.
With extra time, it is also possible to hike there. 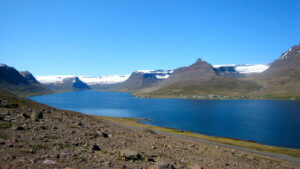