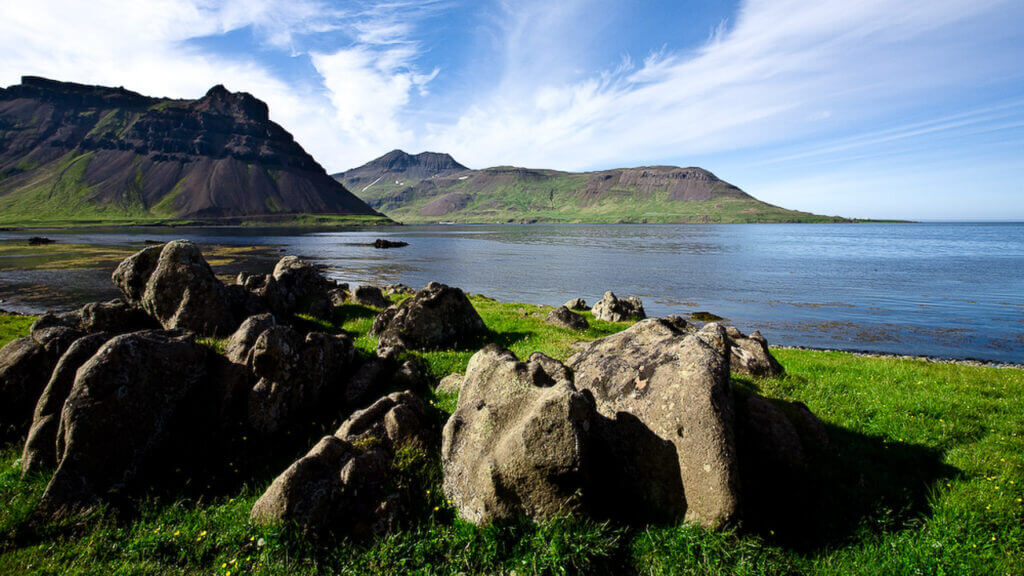 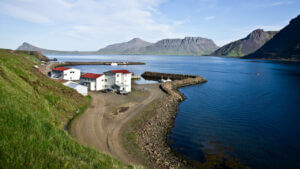 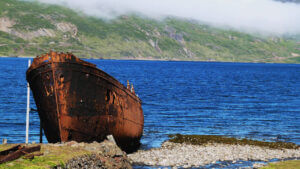 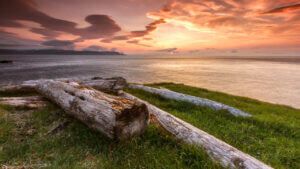 The northern part of the Strandir coastline is one of the most remote parts of Iceland. Arneshreppur, the least populous municipality in Iceland, has fewer than 50 inhabitants.

The lonely unpaved road hugs the coastline for most of the way, with scenic inlets, waterfalls, and beaches strewn with Siberian driftwood.

Our first stop is Djupavik, a small hamlet that tells the tale of the boom and bust of the herring industry in Iceland. The huge abandoned herring processing factory, which was the largest concrete building in Iceland when it was built in 1935, now serves as an exhibition space. Behind the factory, the local waterfall plunges dramatically from a cliff overlooking the settlement.
By the shore is a rusting hulk of a shipwreck, which, back in the day, was sometimes used staff quarters when the town could not accommodate all the people working at the factory.

If you’re interested in hiking, Strandir offers some spectacular options. The Reykjaneshyrna viewpoint is an easy one-hour addition to your tour, with rewarding views over the coastline, fjords and stunning mountains of northern Strandir.

Further along the coast, we come to the remote Trekyllisvik cove. Surrounded by towering mountains, it is difficult to imagine this special place was the centre of witch burnings in the 17th century.

We continue over the mountain to Munadarnes, the northernmost inhabited farm. At the mouth of the deep and narrow Ingolfsfjordur fjord, the area surrounding the farm has some of the best views in the region, especially the peaks of Drangaskord on the horizon.

On the way back, it is possible to take the drive around the Drangsnes peninsula instead of taking the same road back. 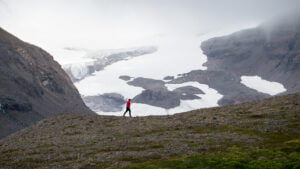 An off-the-beaten-track tour to Kaldalon glacial creek and Drangajokull glacier on the northern coastline of the beautiful Isafjardardjup Bay.