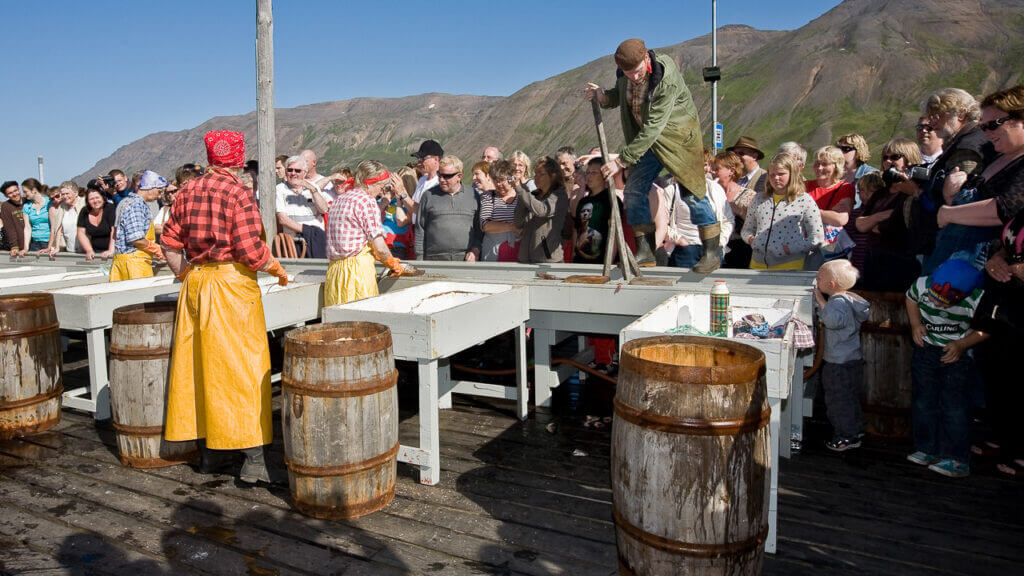 Icelanders love nothing more than making the most of the bright summer days at outdoor festivals. Nearly every town and village has a festival of some sort.

Before we start, it’s worth mentioning Seamen’s Day on the first Sunday in June. A celebration of the gruelling work of sailors, as well as the countless lives lost over the centuries, Seamen’s Day sees games, concerts, exhibitions, and more in fishing towns around the country. The nation’s entire fishing fleet is in port and trawlers are decorated with flags.

It’s also worth pointing out that Iceland’s National Day is on the 17th June each year. Then, you’ll notice Icelandic flags everywhere, a smattering of people wearing the iconic and beautiful national costume, and lots and lots of children high on candyfloss. 17th June has a reputation for always being rainy, but that’s probably just urban legend!

Here, we take a look at a few of our favourite festivals at the country’s cruise ports.

At the start of July each year, Akranes holds its Irish Days festival, celebrating the town’s Celtic heritage. While this part of West Iceland does indeed boast closer Celtic ties than much of the rest of Iceland, to call Akranes an Irish town is deliberately tongue-in-cheek. Reminiscent of St. Patrick’s Day (but distinctly Icelandic), expect competitive sand castle building, Irish flags, a market, music, a reddest hair competition, and, of course, Guinness.

The first Monday in August is a public holiday in Iceland and the weekend has become the country’s biggest travel time. Whole towns appear to empty as people head cross country to dozens of festivals. One of the biggest festivals is in Akureyri.

At around the same time, sort of joined to the festival, but also sort of separate, is Akureyri Car Days. The festival is a must for petrolheads and is seen as a de-facto annual meeting for car enthusiasts from all over Iceland. Expect burning rubber, loud engines, racing, and a good deal of showing off.

The town festival in Grundarfjordur translates into English as “At a Good Time”. It takes place in the last weekend in July and sees locals decorate the different parts of the town in different colours in preparation. Then, at the festival, brightly dressed townspeople parade through all the decorated areas and end down by the harbour, where entertainment and dancing continue long into the night.

During the second weekend in June, Hafnarfjordur holds its annual Viking Festival. And while it might sound like an invention for tourists, it is actually a very fun and popular four days for residents and visitors alike. Designed to feel like you’re stepping back a thousand years, take some time out to enjoy the market, the rough textiles, the mead, and plenty of sword fighting.

Just when you think Holmavik can’t get any more cute and charming, you find out that its annual festival is called Happiness Days. The aim late each June is simple: to reconnect with every single local, whether resident or living elsewhere, and to make sure that they, and all visitors as well, feel peace, love, and inner happiness with every step. It’s a sort of town-sized battery charger, and you’re invited to plug yourself into the good vibes, as well as the good food, music, art, and games.

In Husavik, you can celebrate Candy Days, which is viewed as a sort of ‘reverse harvest festival’: an early June celebration of the past winter’s crop of new music and art. As with several other Icelandic festivals, Husavik celebrates by dividing the town into zones, each decorated with a different colour.

Isafjordur’s biggest events are actually the Aldrei for eg sudur music festival and Ski Week, both of which coincide with Easter.

But there’s always something interesting going on in the summer, too, and if you visit during the early August holiday weekend, don’t miss the chance to see (or even participate in) a bit of swamp soccer!

Neighbouring Bolungarvik hosts the European Swamp Soccer Championships each summer–which is an event every bit as ridiculous and energetic as it sounds.

Taking the higher ground, culturally speaking, Patreksfjordur presents the Skjaldborg documentary film festival early each June. The festival takes pride in shining a light on excellent documentaries people may not otherwise encounter—including the strange, the niche, and the expensive to make.

In some ways it is fair to say that summer in Reykjavik is a festival. Certainly, there are multiple events to choose from every single day, from exhibitions to outdoor concerts and sports tournaments, to name just a few.

August sees Reykjavik Pride take over the city each year with a weeklong calendar of events, and a huge parade that regularly attracts over a hundred thousand participants and spectators.

Later that month, Reykjavik celebrates its birthday (called Culture Night) with an all-day programme of events and free live music, free entry to museums and galleries, and all topped off with a spectacular fireworks display.

Seydisfjordur is one of Iceland’s most artistic towns and boasts a variety of summer events, large and small. However, if you visit in late June, you might be lucky enough to catch the Great Forest Day.

Located in Iceland’s biggest forest, over the mountain pass from Seydisfjordur, the festival celebrates All Things Tree. It includes games, a lumberjack competition, barbecued food, and plenty more.

In keeping with its image as the old herring capital of Iceland, Siglufjordur (pictured above) looks to the golden past in its early July folk music festival, which features traditional music, dancing, courses, and more.

One of Iceland’s oldest town festivals, Danish Days celebrates the town’s close trading ties with Denmark through the centuries. It is now held in late June every-other-year, in rotation with the town’s winter festival which celebrates the northern lights.