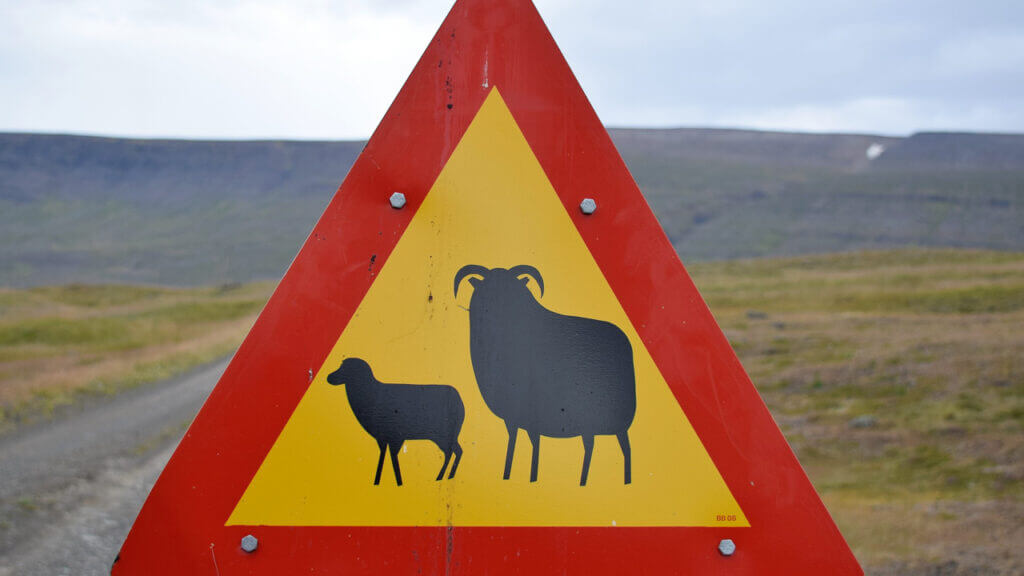 Iceland is a great place for observing animals and wildlife in their natural environment – the elusive Arctic fox, curious seals, free-roaming sheep, the sturdy Icelandic horse, and an incredible variety of marine life and birds.

The Arctic fox is Iceland’s only native land mammal. All others were brought by early settlers, or imported more recently. Some of those, however, are now considered unique and special breeds, thanks to their centuries of isolation.

Iceland’s only native land mammal is a descendant of the last Ice Age. It is believed to have reached Iceland by walking over frozen sea, subsequently getting stranded as the ice cap retracted north.

Away from the crowds of the Ring Road, the remote Westfjords is the best place in Iceland to see foxes, especially the uninhabited Hornstrandir nature reserve, where they are protected from hunting and less afraid of humans.

The settlement of Hesteyri is home to a fox family which tends to take a liking to human visitors. Hesteyri is a short boat trip from the port of Isafjordur.

You might also see these elusive creatures whilst mountain hiking in the wilderness of the Westfjords, and not only on Hornstrandir. We offer guided hikes from the ports of Isafjordur and Patreksfjordur.

Although there is nothing better than seeing them in the wild, the town of Sudavik hosts the national Arctic Fox Centre, dedicated to the preservation and protection of Arctic foxes. Apart from the fascinating exhibition, it also has an outdoor pen which is home to rescued foxes.
It is possible to stop there on our tour to the Isafjordur bay.

Outnumbering people by a ratio of 2:1, the sheep are farmed for their wool and meat. In the summer they are set free and roam the countryside, climb mountains, and often cross busy roads, bewildering unaccustomed drivers.

Their soft and uniquely water-resistant wool is the essence of the Icelandic ‘lopapeysa’ sweater, and the tender meat, naturally flavoured by their diet of wild grasses, herbs and berries, is a true delicacy.

Another millennium-old pure breed, the Icelandic horse is sturdy, friendly and unique. It is the only breed in the world with five gaits, has a variety of coat colours and even a naming commission to regulate their names!

In fact, this beautiful breed has become so popular internationally that today there are more Icelandic horses overseas than at home.

Brought from Norway in the 18th century, reindeers survived only in East Iceland, where they roam completely wild in the countryside.

A sightseeing drive through the East gives you some chance of seeing them, we recommend the East Fjords Highlights, which we offer from the ports of Seydisfjordur and Eskifjordur.

They are also hunted for meat, in strictly regulated numbers, and bugers, steaks, and pates are available.

Seals have inhabited Iceland’s shores long before people turned up and were extremely valuable to early settlers who made use of their meat, skin and oil.
The two species – harbour seal and grey seal – live year-round in Iceland and are best spotted in the Westfjords, Northwest Iceland, and Southeast Iceland’s Jokulsarlon glacier lagoon.

Our tour to the Isafjardardjup bay stops at Hvitanes, a popular ‘haul out site’ and great place to see them as they bask on the rocks.

The stunning red-gold sands of Raudasandur beach are also home to a seal colony, which can often be seen lounging on the beach.

Wild minks in Iceland are descendants of those first imported for fur farming in the 1930s. The highly adaptable, semiaquatic animal has rapidly spread all over Iceland and negatively impacted the ecosystem.

Iceland also has a very wide variety of bird- and marine life. You can read more in our dedicated articles about Birdlife in Iceland and Whale watching in Iceland.