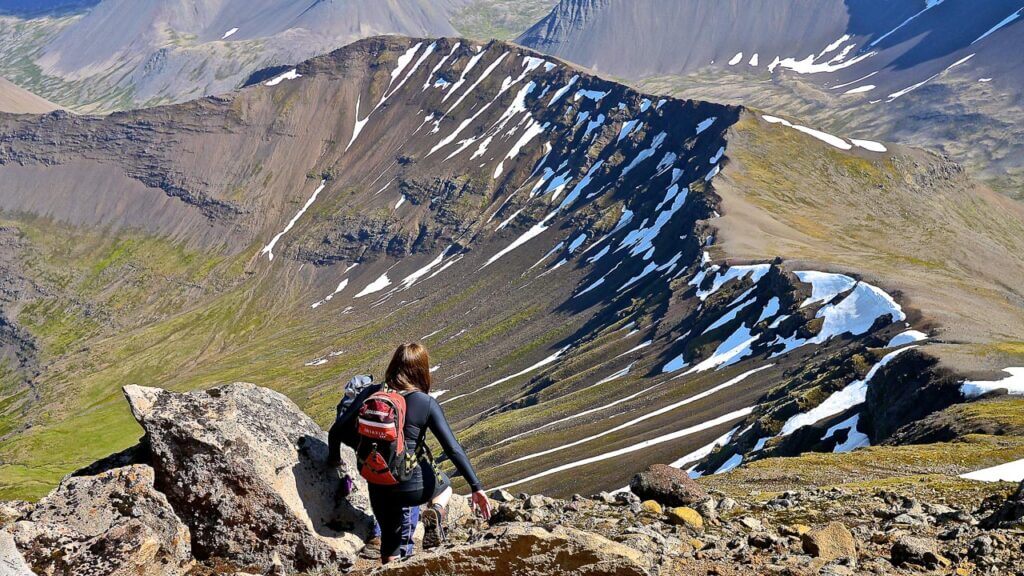 Hiking Iceland on a cruise

Iceland is a hiker’s paradise. Its spectacular landscape offers you a huge range of options, from the easy coastal walk to the truly challenging—with views of deep fjords, islands, towering mountains, and more. Hiking Iceland on a cruise is totally possible; despite the time constraints.

Although you’re on a cruise with limited time, there’s probably time for a day hike from one of your ports.

Our local guide will pick you up, show you Iceland on foot, and drop you back in time for departure.

Here are some options for great day hikes from the different ports:

Reykjavik
Esja is the mountain across the bay, enticingly visible from all over the Icelandic capital. The hike offers lush slopes at the bottom and a short, rocky climb at the top. Esja (914 metres) offers views across the entire capital region and much of southwest Iceland.

Another option is Glymur; Iceland’s second-tallest waterfall, and definitely among its most picturesque. Glymur is under the radar of most visitors. Even some locals haven’t heard of it. This is because it is tucked away at the end of a long fjord, requiring a (very enjoyable and interesting) hike. You’ll be glad you made the effort!

Haifoss, meaning tall waterfall, used to hold Glymur’s crown as second-tallest waterfall in Iceland. But modern measuring techniques have since reclassified it in fourth place. Despite this, it is one of the most impressive falls in the country, commanding views of Hekla volcano. The hike also includes Granni waterfall, which is right next door. A trip south to hike Haifoss is another great idea for a day hike from Reykjavik.

Akureyri
Lake Myvatn is one of the jewels of North Iceland and provides some spectacular hikes. Furthermore, there is so much on foot that visitors in cars completely miss out on. Take a visit to Leirknjukur, an active volcano in the Krafla lava field, the surreal Skutustadagigar craters, and the ‘perfect’ cone of Hverfell volcano. The area is also extremely rich in plant and birdlife.

Dettifoss is the second-most-powerful waterfall in all of Europe. This alone makes it worth visiting, but its location on the edge of the imposing expanse of the Icelandic highlands means it is a memorable day out for any hiking enthusiast.

Don’t miss Jökulsargljufur canyon—an imposing cathedral of rock carved by a raging glacial river and forming the northernmost part of Vatnajokull National Park. It is Iceland’s largest national park, and the second-largest in Europe. 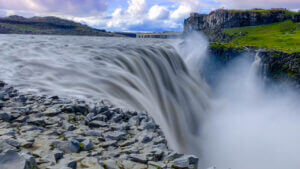 Isafjordur
Those hiking Iceland on a cruise to Isafjordur have options that include Kubbi mountain, Valagil canyon and waterfall, the spooky Oshlid abandoned coast road, and Kistufell—a rewarding mountain to climb, a scenic boat ride away on the famous Hornstrandir nature reserve.

For something even more off the beaten track, check the Folafotur peninsula and Galtarviti lighthouse.

And if culture and history are your hiking highlights, then Haukadalur valley makes for the perfect setting with its history from the Gisla saga, one of the famed Sagas of the Icelanders.

If you like to aim for the highest peaks, then Kaldbakur is for you. At 998 metres, it’s literally the top of the Westfjords region. Sauratindar is another one that should not be missed for the best views over Isafjordur bay, its islands and Snaefjallastrond.

Seydisfjordur
Hikers are spoilt for choice in the East Fjords region, but particular highlights include Hengifoss waterfall, with its overhanging basalt columns that create a memorable and almost engineered appearance.

Also featuring basalt columns, a visit to Studlagil canyon is not soon forgotten. 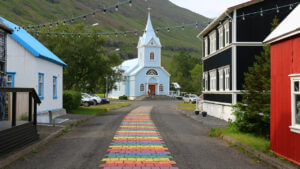 Patreksfjordur
The ideal base for trips across all of the south of the Westfjords region, Patreksfjordur offers numerous hiking opportunities. One of the best is Latrabjarg bird cliffs. Latrabjarg is the westernmost point in Europe and is Iceland’s longest and busiest nesting cliff for many species of seabirds. At its highest point, it rises up almost half a kilometre from the crashing North Atlantic Ocean below.

Grundarfjordur
Between the towns of Grundarfjordur and Stykkisholmur lies the Berserkjahraun lava field; a great spot for hiking Iceland on a cruise. A fascinating piece of geology in its own right, brand-new just 4,000 years ago, the lava field also has a rich human history and is the location for a bloody chapter in the Sagas of the Icelanders. Two Swedish ‘berserkers’ were brought to the area, the Sagas have it, and one fell in love with the local farmer’s daughter. The disgruntled farmer only agreed to marry his daughter off if the Swedes could forge a path through the lava field — a feat he firmly believed to be impossible. The berserkers succeeded against the odds, however. But instead of the promised wedding, only murder awaited the Swedish berserkers, with their bodies unceremoniously buried next to the path they had built.