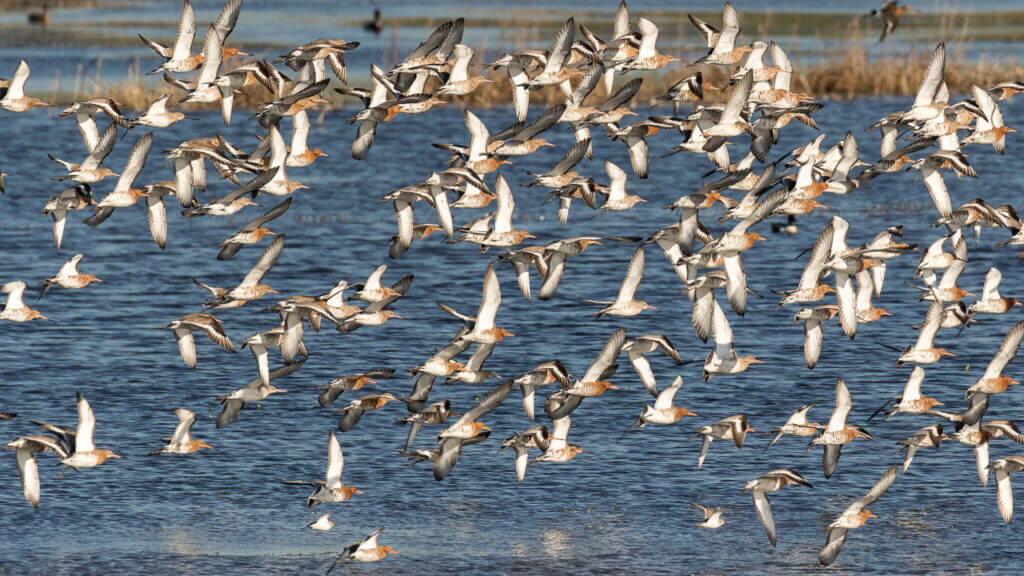 Although there are just about 80 species that regularly nest in Iceland, the abundant populations make Iceland a paradise for bird lovers – with birds nesting in sea cliffs, on islands and nearby lakes.
Many of these birds are very easy to find along the coastline or near the harbour – the aggressive arctic tern, the long-lived northern fulmar, the common snipe, the common starling and various species of gulls and ducks.
This article is not intended to be comprehensive and mainly outlines some species that are important historically, culturally and in folklore.

Strikingly beautiful, the Atlantic puffin is one of the best-known symbols of Iceland. Tours to spot them are as popular as northern lights hunts and they make up the theme of most souvenirs.
During May to August, Iceland is home to 60% of the world’s population. Yet they can be hard to find.

The Latrabjarg bird cliffs in the Westfjords are home to millions of seabirds including the puffin, and the best place in Iceland to get close to them, as the puffins can sit mostly fearless on the cliff’s edge.
We offer a tour to the Latrabjarg Cliffs from Patreksfjordur port with an option to also visit the Raudasandur beach as well.

Borgarfjordur Eystri in the Eastfjords is known to be the town of elves and puffins. The harbour area at the end of the road is home to a large puffin colony with an excellent viewing platform and pathways to get close to them.
We offer a Puffins & Elves group tour from Seydisfjordur port and a private tour option from Eskifjordur.

For cruise ships coming to Akureyri or Husavik, it is possible to combine puffin watching with whales on our Godafoss, Whales and Geosea tour.

The largest puffin colony in Europe is in the Vestmannaeyjar islands. Visitors to the main island of Heimaey can enjoy our Heimaey Island sightseeing tour which also goes to the Storhofdi cape, Iceland’s southernmost and windiest point, where there is an excellent viewing facility over one of the main sub-colonies.

The Golden Plover is very special in Iceland. Nicknamed vorboðinn ljúfi (sweet spring herald), it is believed to be the harbinger of spring, and has inspired many writers. The most famous of these is the poem ‘Lóan er komin’ by the 19th-century poet Páll Ólafsson.
You’ll need a keen eye to spot its gold, white and black coat, which blends very well with the Icelandic landscape.

The hardy Arctic Tern flies 40,000 kilometres from Antarctica to spend the summer in Iceland. Observers say that in a lifetime it could travel a distance, which is the equivalent to flying to and from the moon as many as three times. They are fiercely protective of their young so beware of venturing too close to their nests. During breeding season their high-pitched shrieks and patrolling flight patterns will give them away.

The largest of the falcon species, the Gyrfalcon is Iceland’s national bird and lives in Iceland throughout the year. Worshipped by the Vikings and sought after by royalty in the Middle Ages, they were used for falconry and hunting for centuries.
They are mostly seen in the Jokulsargljufur river canyon in North East Iceland where there is also a centre dedicated to them; and the Arnarfjordur (“Eagle fjord”) in the Westfjords.

The handsome raven is associated with folklore with various interpretations of their different calls and movement. Legend has it that ravens meet twice a year to share news and decide if they will be naughty or nice the coming year. In Norse mythology, the god Odin had two ravens, Huginn and Muninn, who would bring him news from all over the world. The first settler Floki set free three ravens and followed one of them to find Iceland.
Naturally curious birds, they love shiny round objects so you can often find an assortment of metal pieces, trinkets, pebbles and the like in their nests.

The common eider duck is one of the most valuable birds of Iceland with eiderdown having being collected and exported since many centuries.

If you’re interested in learning more about this duck and this cottage industry, check this video from the Eider Farming Association of Iceland:

A bird watching haven, the stunning Lake Myvatn area has over 25 different species of birds. With more duck species than any other place in the world, it is also the breeding ground for all species of ducks that nest in Iceland.
We can take you on a private bird watching tour of the area from the ports of Akureyri or Husavik. The backdrop of lava fields, craters, geothermal activity and geological formations add to the special experience. Send us an email to discuss the details.